Last month we ventured to the west coast of Ireland to take on part of the famous Wild Atlantic Way, a series of roads which wind their way along the specactular coastline. We travelled off-season which meant we had the roads, cycle paths, hiking trails and pubs practically to ourselves and were able to truly experience the gnarly weather and powerful Atlantic winds that have carved out this rugged landscape. Armed with our thermals, walking boots and waterproofs we spent a week exploring this incredible part of the world, getting battered by the elements and exhausting ourselves with outdoor pursuits. If you’re planning a journey along the Wild Atlantic Way here are six things you should be sure not to miss! 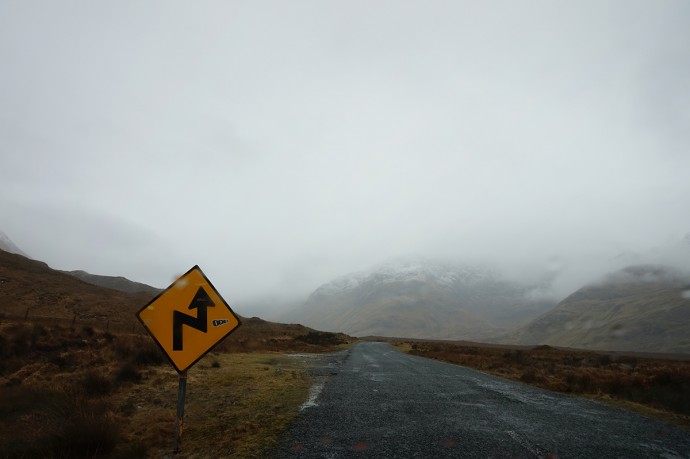 Welcome to the winding roads of the Wild Atlantic Way

As avid cyclists, when we heard there was a 42km cycle path not far from our first port of call we knew we had to take it on, come rain or shine. The glorious Great Western Greenway follows the former route of the Great Western Midlands Railway, which closed in 1937. On the advice of our AirBnB host we skipped the part between Westport & Newport, as this part of the path runs mostly along the main road, and set off from Newport towards Achill island. This well-maintained path is a joy to cycle along with breathtaking views aplenty as you pedal your way through farmland, over mountains and along the coast.

We hired bikes from Clew Bay Bike Hire in Newport for €15 per day and for an additional fee they can pick you up from a different location and drop you back. Personally we didn’t mind cycling back the way we came as it provided new and equally spectacular views! Despite cycling through sun, rain, hail and ferocious winds, this was certainly one of our highlights of the Wild Atlantic Way!

Upon arriving in the charming town of Westport, you can’t help but notice the almighty Crough Patrick mountain looming in the background. Sticking out of the County Mayo landscape, it is said that the 764 metre-high mountain has been a pagan pilgrimage since 3,000 B.C. and is now the site of a Christian pilgrimage associated with Saint Patrick. We’re not in the slightest bit religious but the physical challenge certainly appealed to our restless souls, so on a bright and sunny March morning we set off up the sacred mountain. Generally it takes around 2 hours to reach the summit and 1.5 hours to get back down. The best time of year to climb is between April and September, that being said there were plenty of others taking it on in early March.

…the last part of the climb proved the toughest, with steep gradients, loose rocks underfoot and strong winds which threatened to blow us over at any minute.

We clambered our way up with relative ease, however it was the last part of the climb proved the toughest, with steep gradients, loose rocks underfoot and strong winds which threatened to blow us over at any minute. At the top it was even snowing but our efforts were rewarded with magnificent views of the Atlantic Ocean, Clew Bay and the County Mayo countryside. Don’t forget your camera! 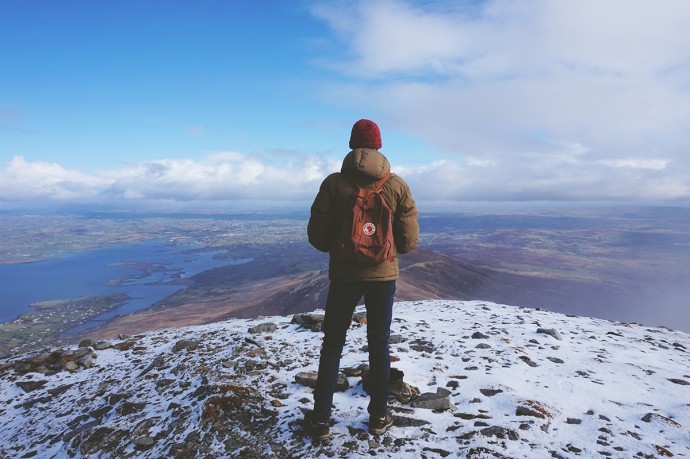 Victor enjoying the view from the top of Crough Patrick

After three nights in County Mayo it was time to head south for Connemara and Galway. Our AirBnB host advised us to the take the mountain road from Louisburgh to Leenane (the R335) which is often featured in “top drive” lists. It’s easy to see why this particular section of the Wild Atlantic Way is so loved, as we found ourselves pulling over every five minutes to admire the view and take a few snaps. The misty weather only added to the moody magic of these imposing mountains, but I can imagine on a clear summer day it is equally as impressive. 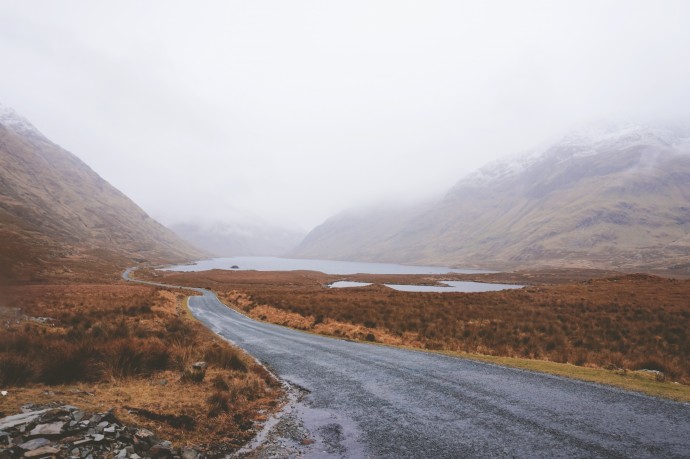 Pulling over to admire the view on on the R335

We never actually intended to visit Kylemore Abbey but as we wound our way along the country roads towards Connemara National Park, this enchanting Benedictine monastery suddenly appeared out of nowhere. Founded by nuns who fled from Belgium during World War I and later serving as a Catholic boarding school, the building and walled Victorian gardens are now open to the public. For us it was enough to simply to pull into the car park and admire the view (we had more outdoor pursuits planned on our route that day) but you can pay to have a look round the interior and learn a bit more about the history with a visit for €13 per person.

No trip to Ireland would be complete without spending an evening propping up the bar in a traditional Irish pub. The Irish know how to do pubs, and it’s easy to see why they have been replicated the world over when you consider the warm and friendly atmosphere that washes over you from the moment you step inside. The harbour city of Galway is a hub for Irish folk music and every night of the week you’ll find live performances in the enviable selection of bars. We whiled away evening sipping on local lager (sorry we don’t like Guinness) in the Tig Cóilí pub and Taaffes Bar, both of which were packed to the rafters and hosted a lively evening of entertainment. 6. Hike – along the Cliffs of Moher

Not normally being the type of travellers who take in the “major sites” we hadn’t done much research before embarking on our trip, however when we saw a picture of the Cliffs of Moher in one of those promotional tour brochures (you know the ones) we knew we had to check it out. We hiked along part of the 20km coastal path, taking in the jaw dropping views as the waves crashed violently beneath us. The path sometimes takes you close to the edge and you really do take a battering from the strong winds blowing in straight off the Atlantic. There really is nothing better than witnessing the sheer power of the ocean that has helped form these commanding cliffs.

Slightly outraged by having to pay through the nose for parking near the visitor centre (my partner is Dutch and I’m just a cheapskate), we opted not to park in the car park there but carried on along the main road heading south and followed signs for another not-so-official car park. After manoeuvring a series of narrow lanes, we eventually reached the “cheap-ass” car park which turned out to be someone’s drive where a plaque requested you to leave €2.50 in the mailbox (you’ve got to love a local enterprise and the element of trust). From here it was just a short stroll up to the cliffs where our walk began! The bracing Atlantic winds on the Cliffs of Moher

This post is just a short list of some of our highlights from our trip, but there were plenty of other great places we discovered and stayed along the way. Are you planning a trip along the Wild Atlantic Way? I’d love to hear from you in the comments section below or via my contact page. Happy road tripping!

Things to do in South Africa If you're planning a trip to South Africa it can be overwhelming when it comes to deciding where to go and what to do,…

When visiting a new city it’s always fun to check out the local distillery, wine cellar or brewery, sometimes to learn about production but…