Every July civilians and members of the military from all over the world descend on the Dutch city of Nijmegen to take part in the Vierdaagse; a four day walk through the surrounding area. Depending on your age and gender you are required to walk either 30, 40 or 50 kilometres per day to receive the coveted royal medal. Being a 30 year old female meant that I needed to walk 40km a day to receive my Vierdaagsekruis, however as my boyfriend (Victor) needed to complete 50km per day I decided to take on the challenge with him and raise money for Focus Birmingham. 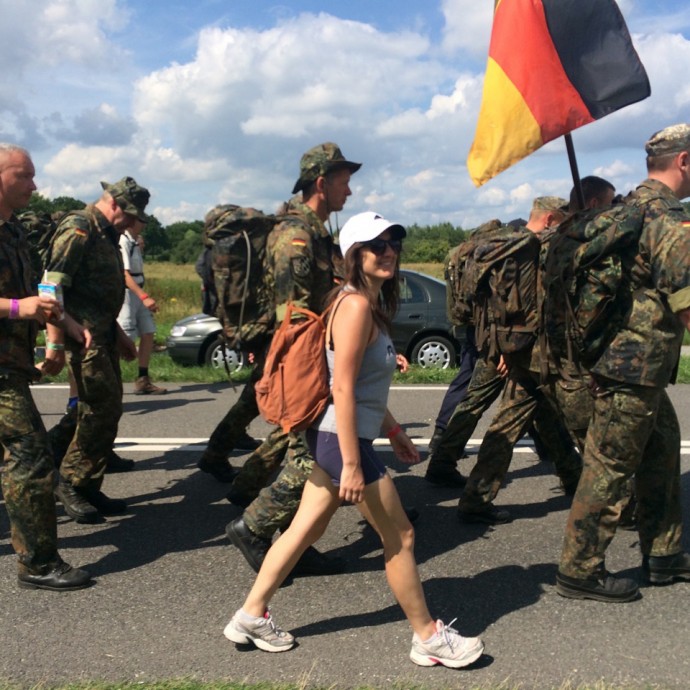 Walking with the German Military during the Vierdaagse

Day one started with a bang as the drunken population of Nijmegen stayed up all night to give us an unforgettable 4.30am send-off. There were high fives, screams of “succes” (good luck in Dutch) and human tunnels to walk through. It was like nothing I had ever experienced before and was a great motivator for the start of our epic journey. Looking back this day was a bit of a blur as we passed through vast areas of countryside and the occasional village. It was amazing to see the support the local communities gave to the walkers as we made our way along the bunting-clad streets to a chorus of cheering and applauding. Loud music boomed from every other household and children held out bowls of sweets and offered high fives to the thousands passing by their doorstep. We were walking from around 4.30am until 4.15pm with a few short breaks in between to refuel and rest our achy limbs. During the last 10 kilometres every part of my body was hurting and needless to say by the end of the day I was exhausted and in bed by 8pm.

My feet were hurting, the relentless sun was beating down on us and I was bloody fed up.

On day two we awoke at 3.15am, tired and full of muscle pains from the previous day’s 50 kilometres. It was hard to come to terms with the fact that we had to do it all again. After setting off I was struggling with my energy levels so we stopped earlier than planned for our pre-dawn coffee. Locals had set up stands along the route selling cheap hot drinks, sandwiches and bananas with plenty of seating where the masses could stop and put their feet up. Some members of the Norwegian military sat down beside us and one jokingly asked if I would mind carrying his bag to the next rest stop. The military complete a 40km route, however the catch is that they have to do it in full uniform along with a bag weighing at least 10kg (after trying to lift the soldier’s bag I can confirm that this would be pure hell). The second day also took us across a never ending dyke. My feet were hurting, the relentless sun was beating down on us and I was bloody fed up. We stopped a couple of times to elevate our feet (a new trick I learnt during the Vierdaagse) but every time we set off again the pain returned. By the end of day two my feet were in pretty bad shape. My toenails had cut into my toes and I had a painful blood blister on one of my little toes (tmi sorry!). Victor persuaded me to go the the Red Cross tent to get them fixed up as we still had another 100km to go over the following two days. After getting my blisters professionally popped and my feet strapped up and taped by an incredible volunteer called Jeroen, it was time to hit the hay again. 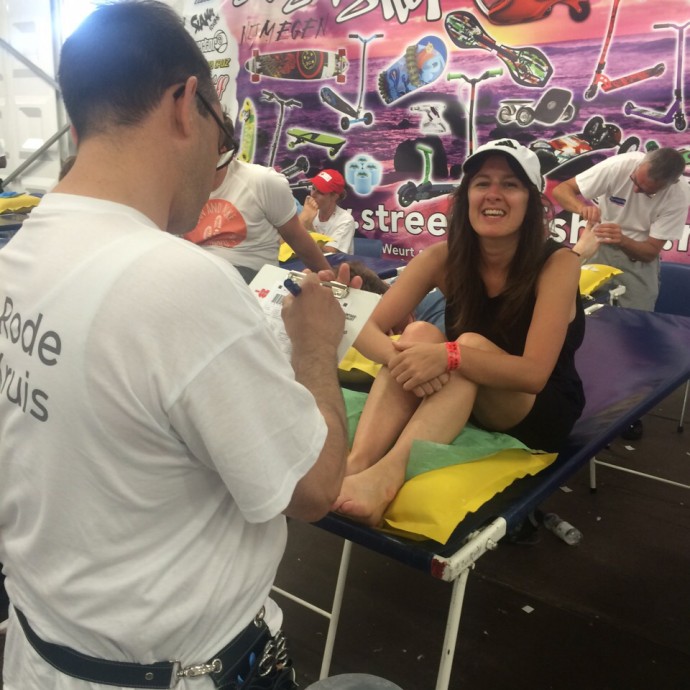 Getting looked after by the Red Cross

The third day was by far the toughest and most emotional day of the walk for both myself and Victor. We raced through the first half of the day as the route guided us through many a village and the party never seemed to end. After lunch things turned quiet and we knew that the legendary “seven hills road” awaited us. By the time we reached the hills we were exhausted and our feet were heavy. Every step up hill felt like it was taking everything I had left. On the second hill I tagged onto the back of a British Military group, joined in their motivating sing-along and powered up the hill. After stopping for a short rest, the subsequent hills were a real struggle and the last part of the walk left us physically and emotionally drained. On our way back into the city we passed through a town where the streets were lined with a huge crowd dressed in white. “You’ll never walk alone” resonated through the streets and the locals sang along and cheered on the walkers. It was a completely overwhelming experience and I felt myself welling up with tears. By the end of the day I was barely able to walk and I had shooting pains in my lower left leg. I sat down and cried (and drank two beers for good measure).

The last day had finally arrived and I have to say I was relieved that it was almost over. Once again the morning flew by thanks to a British policeman and his walking buddy providing some welcome chatter. As the day went on I was once again feeling tired but the finish line spurred me on. Everyone raised my expectations of the “via gladiola” on the final stretch, as they convincingly told me this was what made people keep coming back every year. Onlookers line the streets back into the city and pass gladioli flowers to the walkers. In reality it was no match for the atmosphere in some of the smaller villages and towns we passed through. The turnout was impressive but I didn’t have the same feeling as when I passed through smaller places. Perhaps it was the wider roads, the crowds behind barriers or simply that my mind was focussed on getting it all over and done with. The last hour was tough and I longed for the end. The grand finale was a bit of an anti-climax, I thought I would be more emotional but in reality I was just glad it was all over. I looked down at my shiny royal medal and wondered if it had all been worth it. I was happy I didn’t have to walk any further, proud I’d walked so far and delighted I had beat my fundraising target for Focus Birmingham, so perhaps it had? 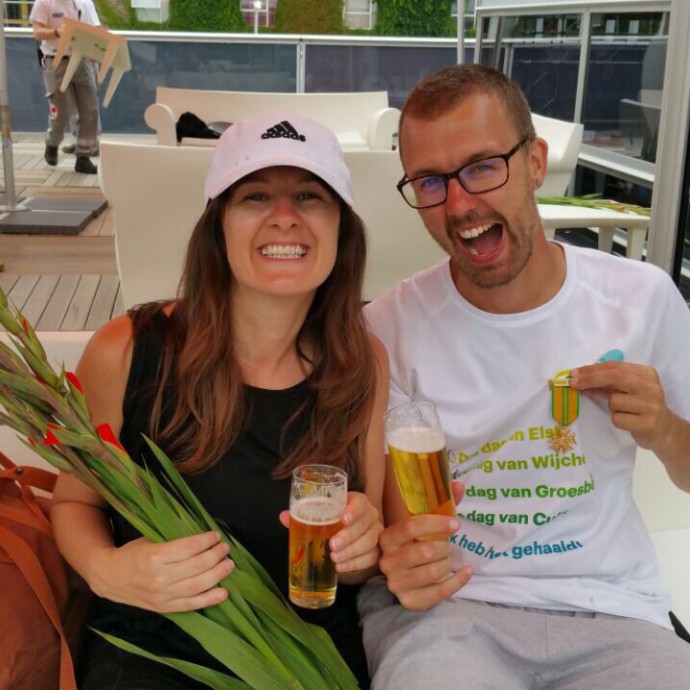 On the last day with our royal medals

Would I do it again? Definitely not! The Vierdaagse certainly pushed my boundaries both physically and mentally, and I was amazed at my body’s ability to keep going. For me, however, hiking and walking is about peace, tranquility and getting back to nature. The route takes you through some beautiful scenery but the thousands of other people walking with you and the parties in the village mean there is a lot of noise and an overload of stimulation. It’s certainly a once in a lifetime experience and there is a certain kind of magic to the event so if you’re thinking of signing up I’d say give it a go. If not, why not just visit the city during the event and join the endless parties? I know I will next time!

Running your own business For around 4 years I ran my own small business, a vintage clothing brand that I started with a friend in early 2010. We took…

Last month we ventured to the west coast of Ireland to take on part of the famous Wild Atlantic Way, a series of roads…