After our culinary tour of the Alto Minho region, which you can read about in my previous post , we arrived in Porto and knew we were going to have a challenge on our hands satisfying our newly discerning palette (we had been well and truly spoilt). We needn’t have worried: the city delivered the goods with everything from intimate backstreet bars to fine restaurants serving up international cuisine. Here are a few of my favourite places to eat in Porto: 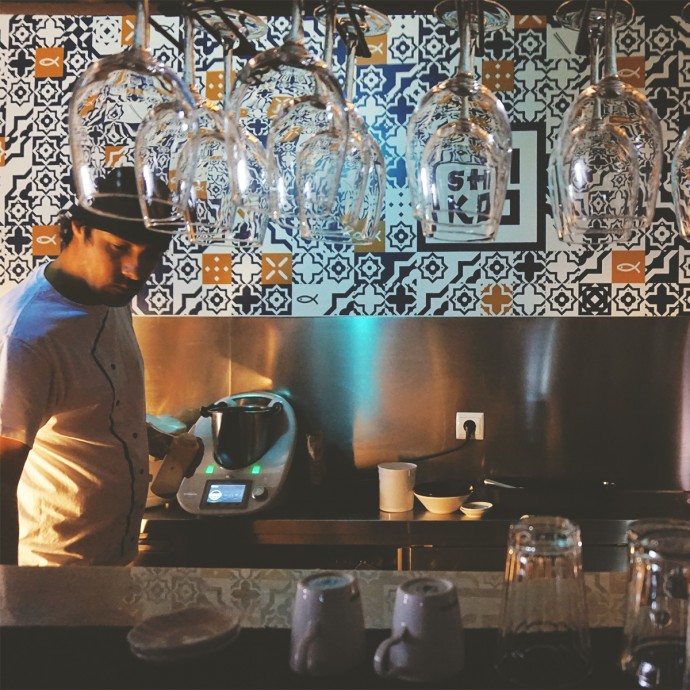 After a Saturday morning treasure hunting on the Vandoma flea market we were in need of sustenance when we stumbled across SHIKO. The interior is something to talk about in itself with elements of wood, marble and metal, bare lightbulbs, chalk boards, and a tiled wall which pays homage to traditional Portuguese design. Of all the places to eat in Porto, this is one of my favourites.

…the chef certainly performed some sushi magic on the natural resources

However it is the food that really takes centre stage here — Porto is next to the sea so it was logical that the fish was going to be top quality but the chef certainly performed some sushi magic on the natural resources. One of the highlights was the perfectly seasoned tataki de salmao (sliced raw salmon) but every dish we tried was mouthwatering. The standard of food was so high we even opted for a dessert and the chocolate and coconut brownie did not disappoint.

Where? Rua do Sol 238, 4000-529 Porto, Portugal
How much? €30 for tea, starter, a couple of mains and a shared dessert. Discounted lunch menu available on weekdays. 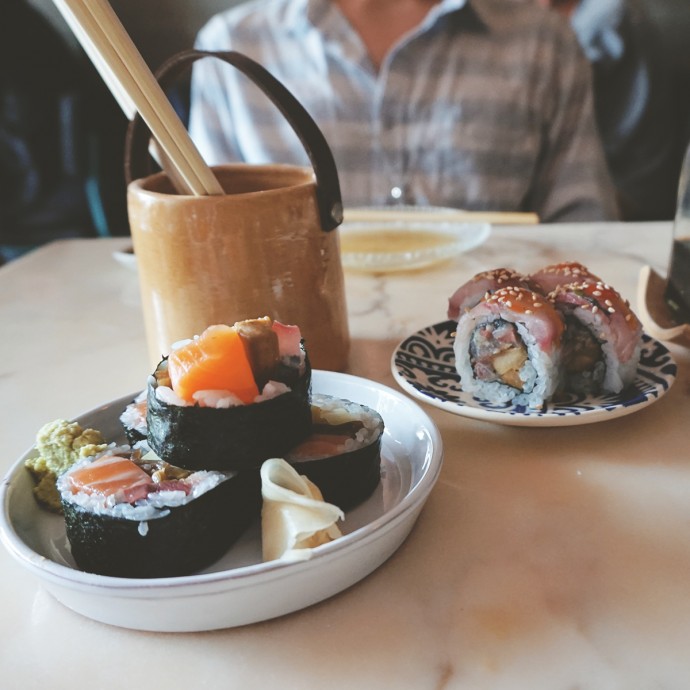 Located away from the tourist hotspots, on the Rua de Cedofeita, you’ll discover the small and hip Catraio craft beer shop. Every city in the world seems to have hopped on the craft beer bandwagon and we were happy to see Porto isn’t just about wine and Port (as much as we love it). We took a seat on the terrace outside and tried to decide what to drink (the interior was equally as welcoming but the sun was shining and we’re from Northern Europe). The menu is extensive, featuring both beers on tap and bottled delights: we managed to narrow our choices by selecting from the eight or so beers available on tap. We sampled a few different beers, asking the knowledgable and friendly barman for advice according to our tastes. This is great little alternative place to sip on a few tasty beers and watch the world go by (especially if you’re a hipster). 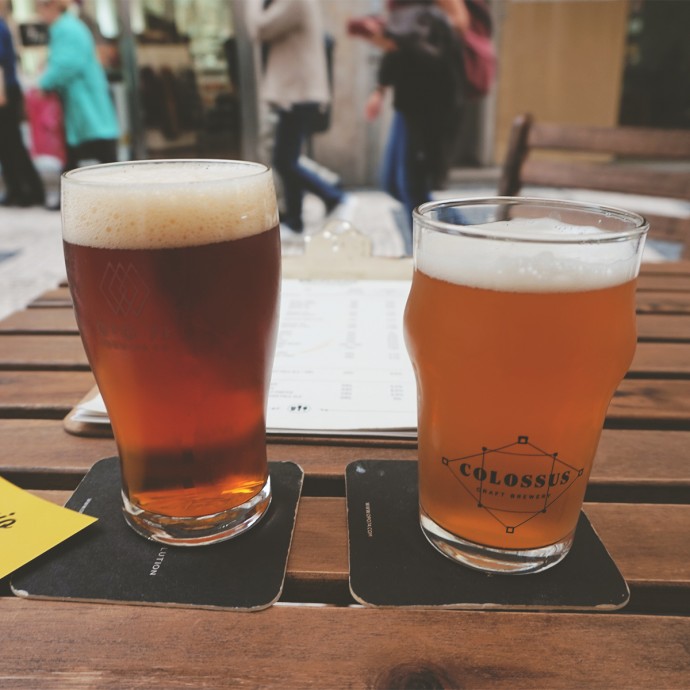 One for me and one for Victor

If you’ve never experienced the magic of Fado you should definitely plan a visit to Maus Amigos if you are in Porto on a Friday evening. We stumbled upon this hidden gem whilst wandering around during the day and returned that evening for some beers and a bite to eat. The intimate establishment was full to the brim with locals and we squeezed ourself in at the bar.

I had no idea what the old chaps were singing about but somehow you could really feel the emotion and passion.

A couple of guitarists close to the door picked away whilst grey-haired men took it in turns to perform a solo. I had no idea what the old chaps were singing about but somehow you could really feel the emotion and passion. The barman informed these guys weren’t professionals: just local guys singing poems about their own lives and experiences — truly amazing. The perfect accompaniment to the music was to sample the local delight of Francesinha along with a few (cheap) beers. Our evening at Maus Amigos was certainly one of the highlights of our time in Porto. We arrived to a small and fairly empty restaurant next to the famous Clergios tower (lucky for us we arrived when we did as the place quickly filled up and people were being turned away). The proprietor asked us with knew how the restaurant worked (we didn’t) and proceeded to tell us “we just keep bringing you food until you tell us to stop”… our kinda place! Casa Santo António serves up small dishes known as petiscos (so pretty much Portugal’s equivalent to tapas).

goats cheese, bean salads, stews… and many more that I can’t even recall

The best bit? There is no menu: great if you love the element of surprise, not so great if you’re a fussy eater or control freak. Fortunately we fall into the first category and along with a carafe of red wine we sampled a wide selection of Portuguese dishes: goats cheese, bean salads, stews… and many more that I can’t even recall. Eventually we told them to “stop”, were persuaded to share a dessert then began worrying how our bill would be calculated. I sent Victor up to pay fearing the worst but rejoiced when he came back and told me we’d managed to stuff our faces and drink wine for around €24 for the two of us, hooray! 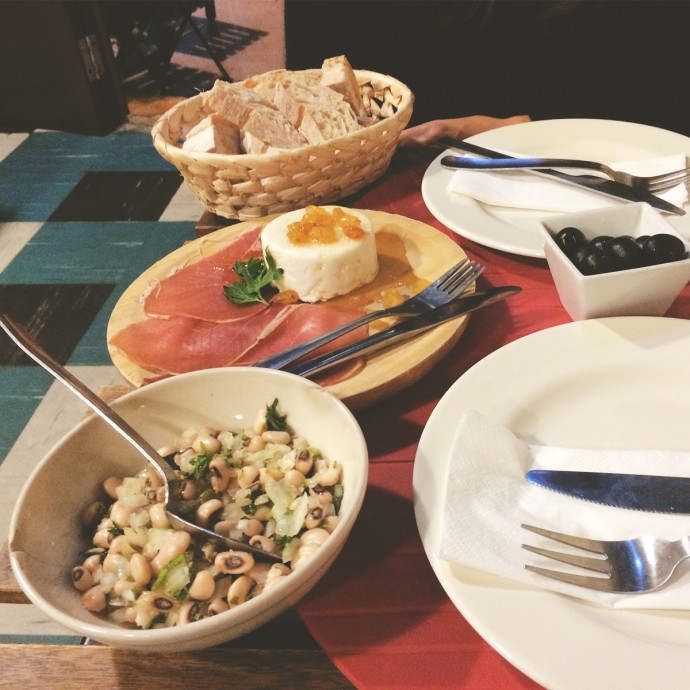 Round one… of many

Have you ever tried Mozambique cuisine? Me neither… or at least I hadn’t until we came across Tia Orlanda. Located on a side street next to the aforementioned Maus Amigos bar, this place is the only Mozambique restaurant in the city making it one of the most unique places to eat in Porto. We opted for a chicken curry and a lamb curry (which melted in our mouths), complete with rice and a local Mozambique beer by the name of Laurentina Preta. Not only was the food delicious and very reasonably priced, the staff were smiley, friendly and helpful. If you’re looking to try something new then this is the place to go! 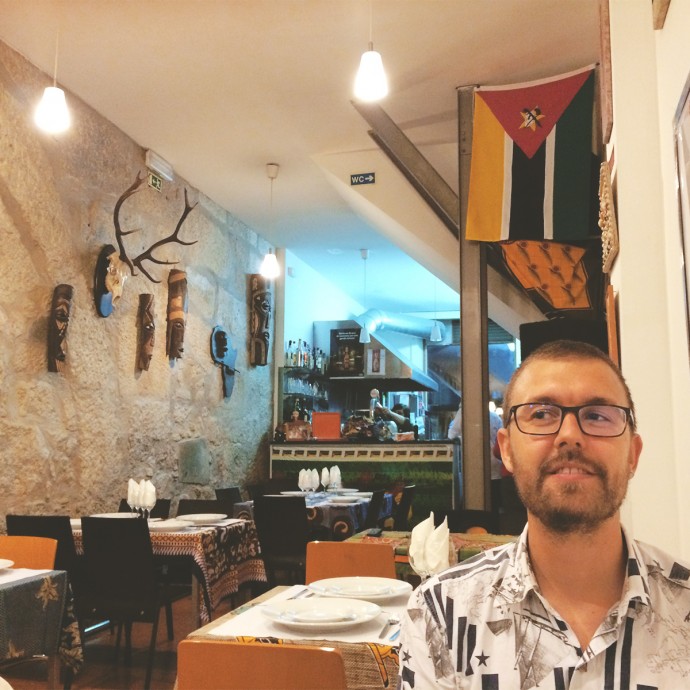 Waiting for dinner at Tia Orlanda 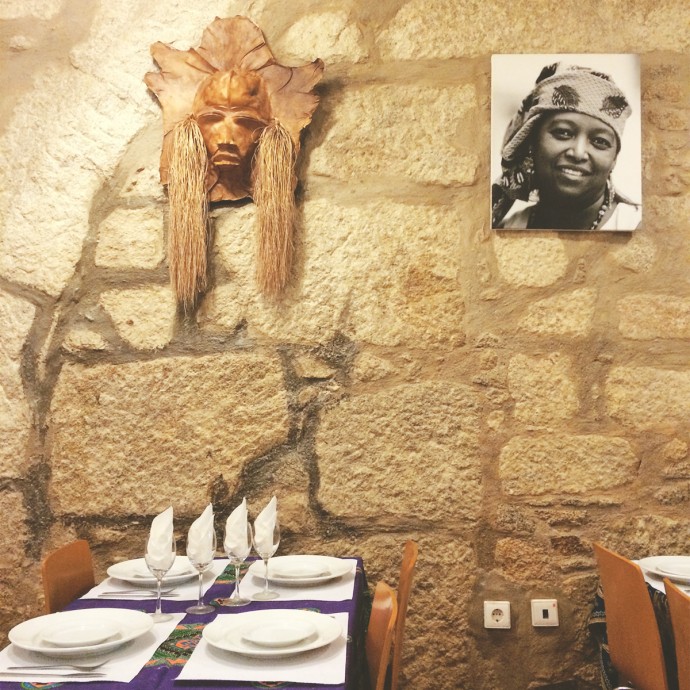 Have you visited Porto? Where are your favourite places to eat in Porto? Let me know in the comments below!

Click on the red markers to discover all the places to eat in Porto mentioned above!

The Local’s Guide to Utrecht Last weekend, I spent a day exploring the charming city of Utrecht. The city is akin to the tranquil — but equally beautiful —…

Free things to do in Porto - I Wander And Roam

[…] Have you been to Porto or are you from there? What’s your favourite free (or cheap) thing to do there? If you’re looking for great places to eat and drink in Porto you can check out my previous article here. […]

Thank you so much for featuring us in your lovely blog.
The post is beautiful and we appreciate it very much.

One rainy Saturday I was rushing through Birmingham when I stumbled upon Yorks Bakery Cafe.  I’d heard a friend mention the name and as I…