It’s hard to know where to begin with this article. I grew up watching the conflict in Bosnia unfold on the TV. At the time I was too young to understand what was going on, too young to know where Sarajevo was and too young to imagine that the war zone I was seeing was once a city. Fast forward 20 years and my boyfriend and I decided to take a some time out from our trip to Croatia to discover Mostar and Sarajevo.

We boarded the bus from Dubrovnik, which wound its way along the Dalmatia coast before heading inland to the Bosnian border, arriving in Mostar around 3 hours later. The city suffered greatly during the war  with around 2,000 people losing their lives during the Siege of Mostar. The buildings still bear the scars of the bitter conflict that this city turned frontline witnessed. Bullet holes can be found at every turn and former homes and offices have been reduced to mere ruins. In stark contrast the old town seems untouched, the famous 16th century bridge was rebuilt in 2004 and souvenir shops and restaurants line the cobbled streets. Day trippers come in their droves and happily take photos of the old bridge, a plaque beside them reads “don’t forget ’93”. 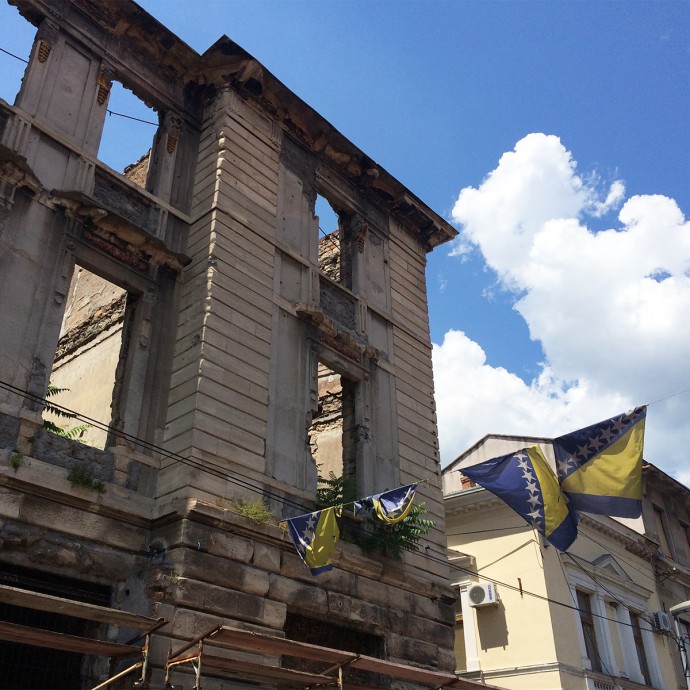 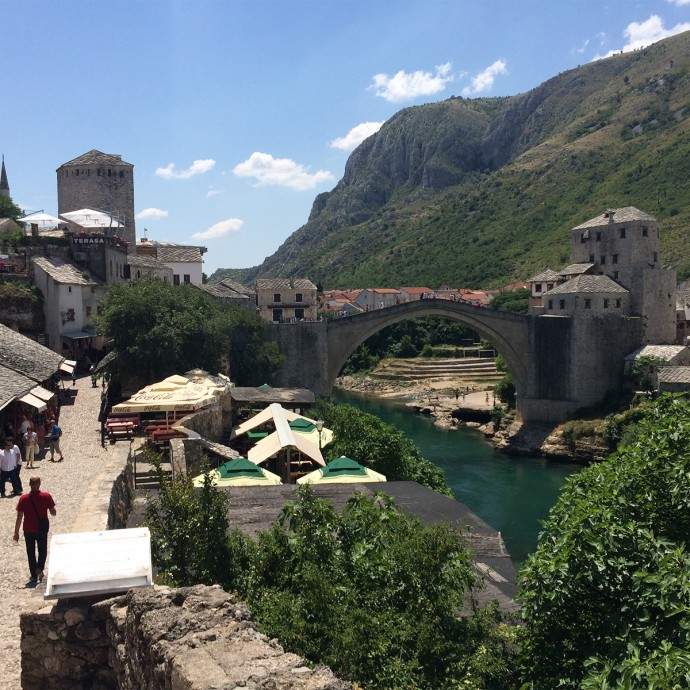 The famous Stari Most bridge in Mostar

The next stage of our journey took us to the capital city of Sarajevo. We took our place in a cabin aboard the 7am train and headed into the mountains. The landscapes you see on the railway journey are nothing short of awe-inspiring. Bright turquoise rivers wind their way through the rugged mountain landscape littered with luscious greenery and humble settlements. It’s hard to believe that a place of such outstanding beauty bore witness to such horrifying things. I felt ashamed of myself for not knowing what magnificent nature lay within its borders. All I knew was war. The magnificent train journey from Mostar to Sarajevo

In contrast to Mostar, the buildings of Sarajevo have been patched up and rebuilt but the war has nonetheless left its mark on the city. The city is like any other capital in some respects with its old town, cafes and museums bustling with people. Look a little closer and you’ll discover places such as the Memorial to the Murdered Children of Besieged Sarajevo 1992-1995. How do people and a city ever recover from such great loss? Sarajevo and its people appear to be getting on with life, but for me there was undoubtedly a feeling I got there, different to one I’ve had anywhere else and one I cannot describe. We visited the deeply moving Gallery 11/07/95; a video and photo exhibition depicting the Srebrenica genocide. It was hard for me to keep it together as I watched the poignant and eye-opening videos but it is something that I feel must be seen by anyone visiting the city. Bosnia is a country with so much to offer in terms of travel, from the breathtaking natural landscapes to the turbulent history of the cities. I feel like we barely touched the surface with our short visit but would urge anyone to go and explore this captivating country. Have you been to Bosnia or are you planning a visit? Leave a comment below and let me know.

There are zillions of places to eat, but finding cheap food in Seoul can sometimes be a bit more of a struggle. Google maps…