When I first arrived in Amsterdam cycling around the city was both terrifying and confusing in equal measure. What are the rules? Why is everyone cycling like a maniac? How is that guy carrying a 3-piece sofa on his bike? After over a year, I’m still not sure I’m qualified to answer those questions but I’ll give it a go. Here are the things I’ve learnt on the cycle lanes of the Netherlands: Me and my bike

Tourists are the enemy

Mopeds and scooters are the enemy

It’s pretty great that wherever you go in the Netherlands there are designated cycle lanes, what’s not so great is that you have to share them with mopeds and scooters. What is this MADNESS? One minute you’re merrily cycling along in the bike lane, next thing you know there’s a scooter zooming past an inch away from you, they might not hit you but they’ll bloody well give you the fright of your life. Dutch law makers — sort it out!

Trams are the enemy

Nobody gets in the way of the tram — the metal monsters are king of the road here. Just like in the school playground, the bigger you are the more power you have (and trams are the biggest kid in Amsterdam). When you hear the almighty “ding-a-ling-a-ling” you better hope you’re not in the way because a tram is on the move (and they pick up speed pretty fast). If you are in the way expect to here the “ding-a-ling-a-ling” repeatedly until you get out of the way: tram drivers show no mercy. Tram tracks are the silent but equally deadly sibling of the almighty tram. They have been perfectly designed to fit the wheel of a bicycle so just make sure if you are riding across them to hit them at least a 45 degree angle — any lower than this and you risk getting stuck and thrown from your bike.

Taxis are the enemy

Taxi drivers are a law unto themselves. When I learnt to drive I was taught to use my indicator when pulling out; to use my mirrors to check if there was anyone around I could potentially kill; to stick to the speed limit; and to generally not be an asshole — it seems the taxi drivers of Amsterdam went to a different driving school to me.

Give way on the right

The general rule is that you give way to oncoming traffic on the right. However, bare in mind there are people who do whatever the hell they want and there are road markings which trump the give way rule. Amazingly there are bike lanes that run straight across the middle of the road which means oncoming traffic has to stop for you. The small triangle road markings mean you may or may not have right of way. According to my accurate source (Dutch boyfriend) “the person who has the tip of the triangle pointing towards them has to stop” — so not only do you have to concentrate on cycling, you also have to look out for triangles, process which way they are pointing and brake (or not)! Good luck! 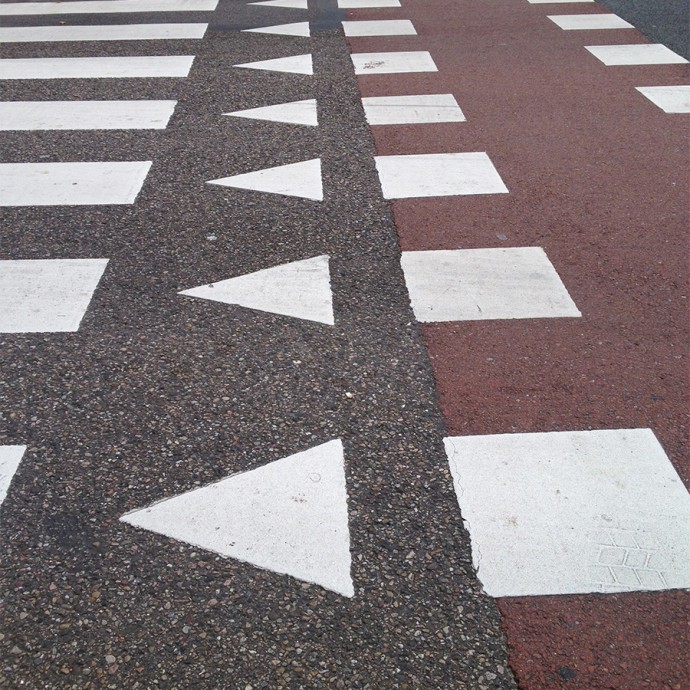 For most people a red light means stop — not for Dutch cyclists! Don’t be surprised if you’re cycling through a green light like a law abiding citizen and another not-so-law-abiding cyclist hurtles towards you from the left or right hand side. When the light changes from green to red the law says stop but the person ploughing into the back of you says go.

Basically, there are rules of the road but there is a general disregard for any of them. I like to think of it as an “every man for himself” system, so just focus on where you want to go, keep your wits about you and you’ll live to see another day. There is a certain beauty to the chaos and it works (most of the time), just make sure you’re ready for every eventuality and you have some Dutch insults ready to yell at people who cut you up!

6 delightful cycle trips from Amsterdam I've always enjoyed cycling but since moving to the Netherlands travelling on two wheels has become a way of life. During the summer months…

Very accurate and funny description of the Amsterdam bike horror. One advice from an old Amsterdammer to every visitor still brave enough to consider renting a bike after reading this: don’t do it! Just walk, but stay off the bike lanes! It’s better for everyone, both for the tourists and for us, the inhabitants, because we at least know what we’re doing but every tourist on a bike is adding more danger to the chaos, probably the most for him/herself.

Last weekend, I spent a day exploring the charming city of Utrecht. The city is akin to the tranquil — but equally beautiful —…