Looking for bike trips from Amsterdam? Since moving to the Netherlands I’ve spent many summer weekends hopping on my bike and getting out of the city, be it for a day trip or an entire weekend away. The best thing about cycling here is that it is pretty much completely flat and there are designated bike paths EVERYWHERE making it easy to travel long distances. I’ve put together a list and guide to some of my favourite bike trips from Amsterdam with everything from beaches to windmills included — I hope you like it! 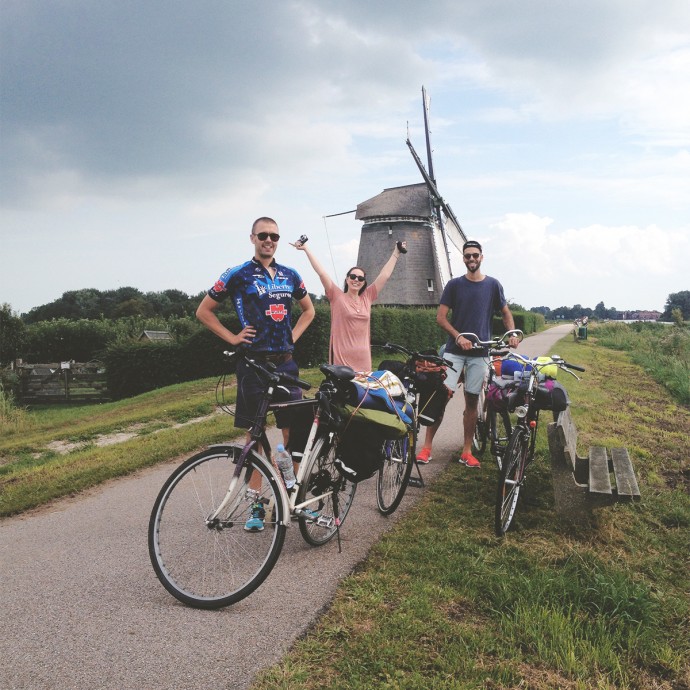 The Netherlands isn’t exactly known as a beach destination — I mean who wants to spend a week getting battered by gale force winds and swimming in the icy North Sea? Having said that, the areas surrounding them are certainly beautiful and the sand dunes make it one of the few places you’ll find a change from the flat landscape. The cycle route will take you through the countryside and the village of Spaarndam which is a great little place to stop for refreshment in one of the waterside cafes. Once in the National Park, you can look forward to a glorious time cycling up and down the dunes and through wooded areas as you make your way towards to the coast (if you choose to go that far). We did this as a day bike trip from Amsterdam but if you don’t want to spend a full day cycling there are plenty of campsites in the area to choose from.

Distance one-way: 31km | Click here for full directions.
Alternative route: If you fancy taking an alternative route then the historic city of Haarlem is a great addition to the trip. We used it as a stop off point on our return journey to grab bite to eat and have a wander around the pretty cobbled streets. 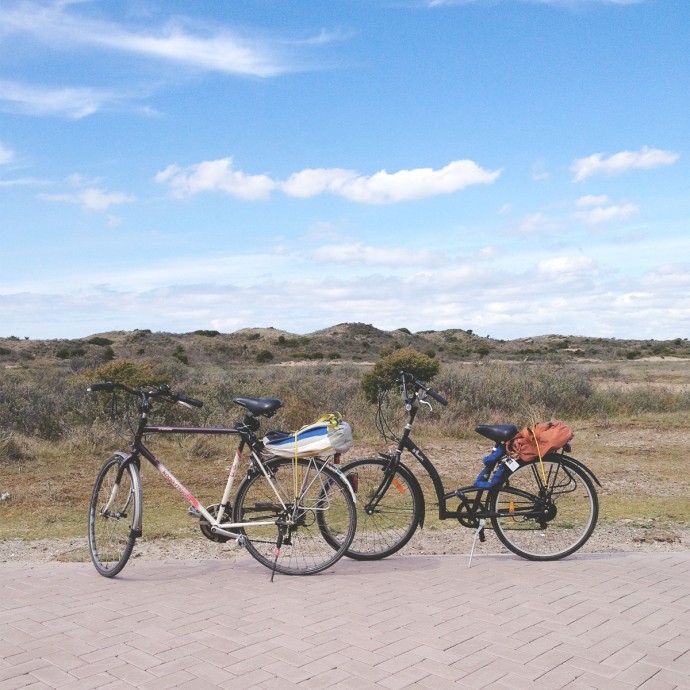 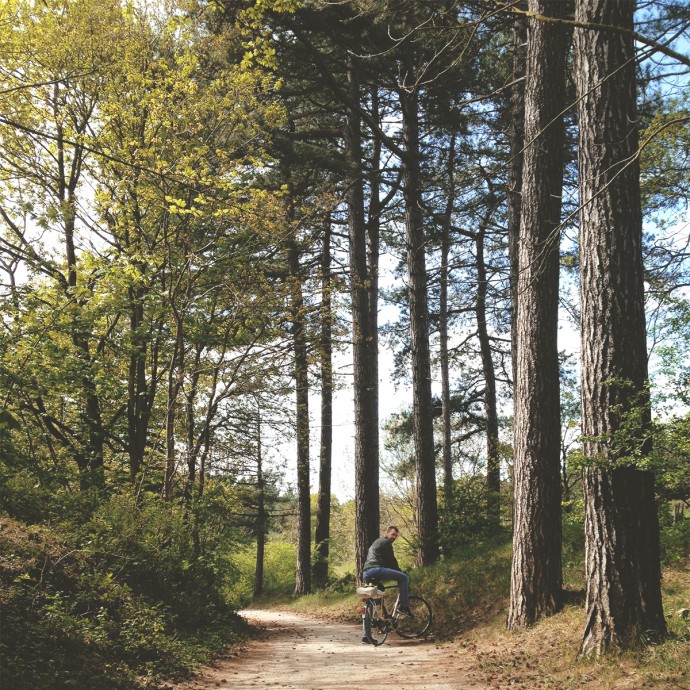 Cycling through the woods in Kennemerland National Park

This is one of my favourite bike trips from Amsterdam. The traditional fishing village of Marken was formally an island, separated from the mainland following a storm in the 13th century. In 1957 it was reconnected by a dike which you will have to cycle along to get there — i’m not going to lie, it’s pretty bloody windy! Once you’ve made your way through the wind gauntlet you’ll be greeted by the charming little Dutch houses synonymous with Marken, they really are adorable. Leaving Amsterdam you head north out of the city and then proceed through large stretches of farmland where there are clearly marked cycle routes and very few cars, it’s a very peaceful route once you make it out of the urban area. There isn’t a great deal to do in Marken itself, on a sunny you can take a seat at one of the restaurants on the harbour front, order a slice of apple cake or a traditional portion of eel (it is a fishing village after all) and watch the swarms of tourists go by. If you’re in need of more fishing village action then there is a ferry which runs to the even more popular tourist town of Volendam (a return ticket costs €9.95).

Distance cycling one-way: 21km | Click here for full directions
Alternative route: If you prefer you can take a longer route beside the water which runs along Uitdammer dijk. The bikes parked up at Marken Harbour

3. THE BEACH AND BREWERY ROUTE — TEXEL

The longest bike ride on the list (although not the longest I’ve ever done), is to Texel — the first of a series of islands in the north of Holland. In August we spent a day cycling there through countryside, towns and along the northern coast, followed by two nights camping on a dairy farm and campsite not far from the ferry terminal. Along the coast, you’ll find long stretches of sand dunes and beaches which are perfect during the summer (if a little windy), whilst inland there is the main town of Den Burg full of cafes, restaurants and the usual seaside gift shops. Texel Brewery should certainly be on your island hit list — the tours were booked up during our break but we found lounging in their sunny beer garden with a tray of samples equally satisfying and educational (make sure you try the deliciously dark Skuumkoppe beer).

Distance cycling one-way: 100km | Click here for full directions
Ferry Information: The return ferry from Den Helder to Texel costs €5 per person with a bike, click here for ferry information.
Alternative Route: If you prefer you can take a less direct route stopping in Alkmaar which is famous for its cheese (complete with cheese museum) and Zaanse Schans (see below). Soaking up the sun in Texel 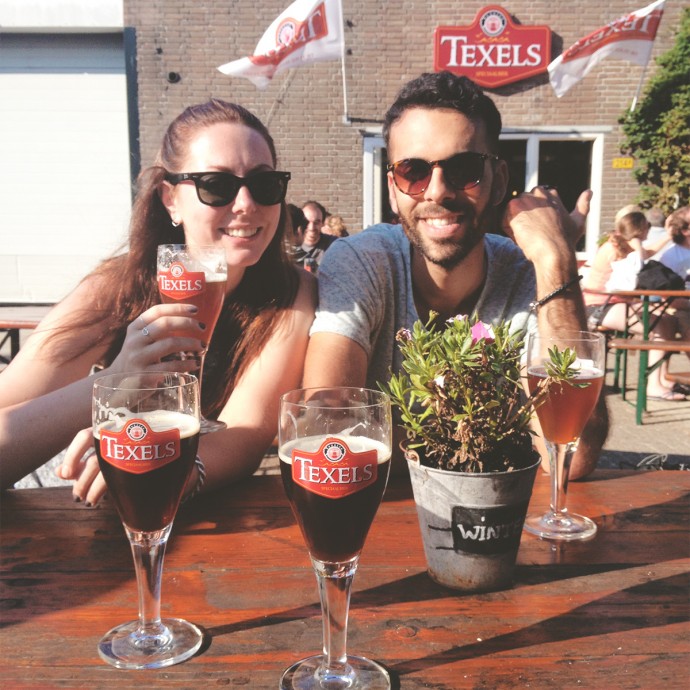 I’ll never forget my first windmill in the Netherlands, or my second one for that matter. There’s something about spotting a windmill that still excites me and I can’t see the novelty wearing off anytime soon. For fellow windmill lovers a visit the Zaanse Schans should certainly be added to the hit list. This place is a bit of a “windmill Disneyland” with coach loads of tourists descending on the small area every day. There are lots of little museums where you can learn all about traditional Dutch crafts: you can do everything from visiting a replica of an authentic Oostzaan cheese farm to purchasing that pair of wooden clogs you’ve always dreamt of! Like I said this place is touristy and a bit of a novelty but worth a visit nonetheless. The windmills of Zaanse Schans

This trip is exactly what it says on the tin: a cycle trip along the Amsterdam–Rhine Canal to the small town on Weesp, which can easily be done in a day from Amsterdam. Heading out of the city to the east, you’ll follow the water almost all the way to Weesp which is peaceful, green and delightful on a sunny day. Upon reaching Weesp, take time explore the centre where you’ll find the old town hall which was built in 1776, along with an array of little shops and cafes. Top of your hit list should be the renowned Nelis’ IJssalon which is said to serve up some of the best ice cream in the Netherlands. DISCLAIMER: I can vouch that it was rather excellent, however having not tried every ice cream in the Netherlands I cannot personally guarantee that it is in fact the best. 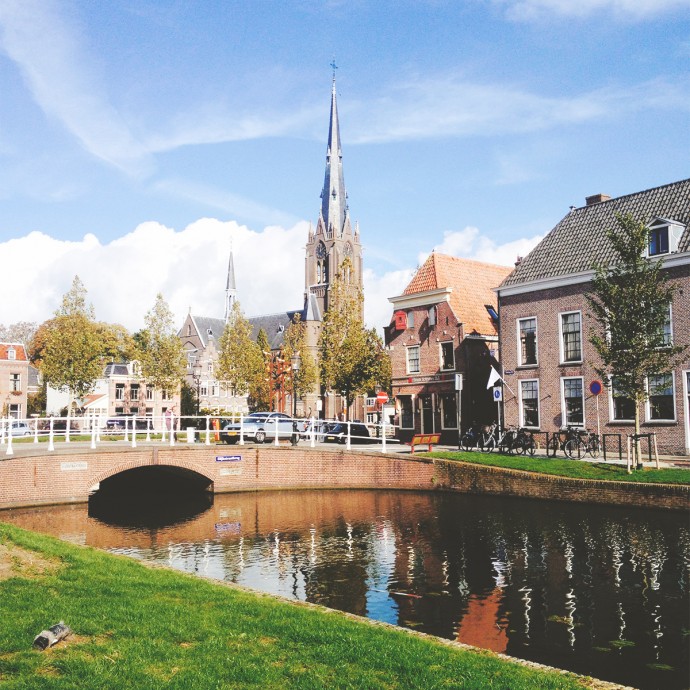 A sunny afternoon in Weesp

Funnily enough I actually discovered Naarden not by bike, but on foot whilst training for a blister-inducing 200km walk which you can read more about here. This town almost comes out of nowhere and you can’t help but being a little blown away by the fortified walls and moat which encase this charming little place. All this being said, one of the highlights for me was in fact a huge secondhand shop which lies on the road into the town and a quirky little antiques emporium within the town walls (located on the Cattenhagestraat). Since making the discovery I have cycled back there to pick up some goodies and enjoy a scenic bike ride which takes you out of the city to the east, along the Amsterdam–Rhine Canal, beside the Ijmeer lake and through the historic town of Muiden (where there is also a castle). This is another gem of a bike trip from Amsterdam on a sunny day. I hope you enjoyed this little guide based on some of my trips so far. If you have any questions abouy bike trips from Amsterdam feel free to get in touch by posting a comment below or via my contact page. Happy cycling!

12 reasons to visit Gabon (by a tourist turned local) And now for something slightly different! This post comes courtesy of Luba Fateeva - a food and travel blogger at Orange Holiday. Luba spent…

Cycling in Amsterdam: a beginners guide When I first arrived in Amsterdam cycling around the city was both terrifying and confusing in equal measure. What are the rules? Why is…

These look so beautiful! I remember going on a cycling tour of Amsterdam, but never ventured outside of the city by bike – I can see that I should have! I did anyway remember going to the beach and loving it: as you say, it’s not the first place that comes to mind in terms of beaches, but it was surprisingly pleasant, especially if coming, like I was, from a cold Belgian winter 🙂

The Best of the Amsterdam Brewery Scene - I Wander And Roam

[…] (the biggest wooden windmill in the Netherlands as a matter of fact). If you’ve read my previous post about bike trips or checked out my Instagram you’ll know that I really love windmills! As if […]

The Punjab is often heralded as a culinary hotspot of India, and the holy city of Amritsar is the perfect place to sink your…