If you’re a regular reader of my blog you’ll know I love writing travel tips for cities. When the lovely folk at WeSwap challenged me to plan my perfect day in Amsterdam for £50, I naturally jumped at the chance and my Amsterdam food tour was born. What is WeSwap I hear you cry? Well, WeSwap is a social currency app which basically means that rather than buying your currency from banks, your money is swapped directly with other people abroad. Nice eh?

Being a lover of all things edible it was a no brainer to put together an Amsterdam Food tour of some of my favourite places in the city. I had £50 loaded onto my account and using the handy app I was able to instantly convert this into euros, giving me the grand sum of €63.39 with which to eat my way around the city. My final exchange rate after fees was a pretty decent 0.7668! When you set up your account you receive a prepaid Mastercard linked straight to your account, a lot of eateries in Amsterdam don’t accept Mastercard but for small fee I was able to withdraw cash from an ATM (free if you withdraw over a certain amount). If you fancy trying it for yourself you can get £5 free travel money when you sign up via this link! You can thank me later!

Welcome to my Amsterdam food tour

Before we even begin the tour, one of my main suggestions for exploring Amsterdam is to hire a bike. This is without doubt the most fun and fastest way to get around the city. As you may have read in my previous post cycling in Amsterdam can be a bit like an episode of wacky races, so if you’re not feeling brave then a 24-hour pass for public transport is available for €7.50 per day (similar price to hiring a bike) and can be used on the bus, tram and metro.
Total spent: €7.50
Amount remaining: €55.89

They say breakfast is the most important meal of the day so this is where I decided to go mad and blow a big chunk of my budget (a risky strategy I know). The first stop of my Amsterdam food tour is my former neighbourhood of De Pijp for what is said to be one of the best coffees in town. The Scandinavian Embassy is known for its pour over coffee but another reason to visit is certainly the breakfast/ brunch offerings. I opted for the salt cured salmon and poach eggs served with Danish rye bread and sheep yoghurt blended with caviar, it really is a beautiful blend of flavours. Washed down with one of their top-notch coffees you can’t get a much more satisfying start to the day.
Total spent: €15.10
Amount remaining: €40.79 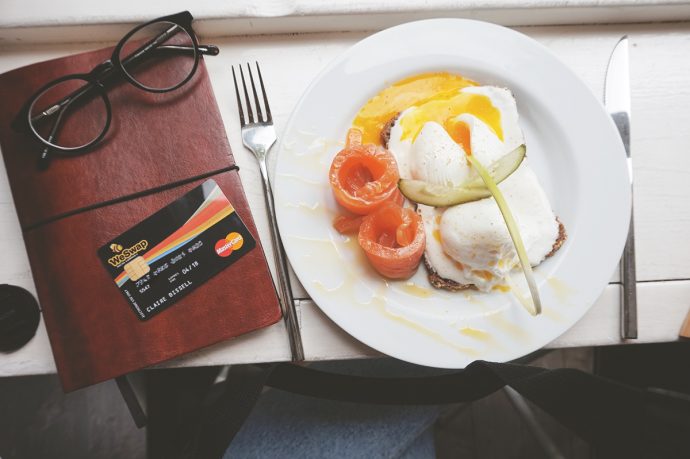 Starting the day with the best eggs in town After breakfast it’s time for the first typical Dutch delicacy of the tour, and a trip to the famous Albert Cuyp Market (also located in De Pijp). This busy market sells everything from tulips to phone chargers and is also home to an array of excellent food stalls. In my eyes the stroopwafel is one of the greatest example of Dutch engineering. Forget the North Sea Protection Works — it’s all about two thin waffles with a caramel syrup filling. These are available to buy in any supermarket but Albert Cuyp Market has a couple of stalls where you can buy the extra large freshly made version…. lekker (Dutch for tasty)!
Total spent: €1.50
Amount remaining: €39.29 Staying in the same neighbourhood, lunch was a slightly less decadent but equally tasty affair. Indonesian and Suriname restaurants can be found EVERYWHERE in Amsterdam and they are always a great option for a budget eat.

Don’t let the no frills interior or the bargain prices fool you, this place is an excellent eatery.

Whenever I have a friend visiting I always take them to Warung Spang Makandra which my boyfriend & Amsterdam local tells me received an excellent review from a ruthless food Dutch food critic! Don’t let the no frills interior or the bargain prices fool you, this place is an excellent eatery. The larger meals are always delicious and very filling but as this was a lunchtime snack I opted for a quintessentially Dutch/ Indonesian kip kerrie broodje (chicken curry sandwich to you and I). The broodje is the ultimate on-the-go lunch in Amsterdam and you shouldn’t leave without trying one.
Total spent: a bargain sum of €5.00 (including a drink)
Amount remaining: €34.29 Inside the basic exterior lies a world of tasty treats Chomping away on my kip kerrie broodje

The De Pijp neighbourhood is also home to my favourite park in the city — the small but perfectly formed Sarphatipark. After having a wander around the park to make room for some more grub the next stop of the day takes you back to Albert Cuyp Market for some more Dutch cuisine. I think one of the main reasons I love Kibbeling (battered chunks of deep fried fish) is because it is like a lighter, snack version of traditional British fish and chip shop fish. I visited the Vispaleis stand on the corner of Albert Cupy and Eerste Sweelinckstraat (try saying that with a mouthful of fish), and enjoyed a small but satisfying portion of kibbeling with tartar sauce.
Total spent: €3.50
Amount remaining: €30.89 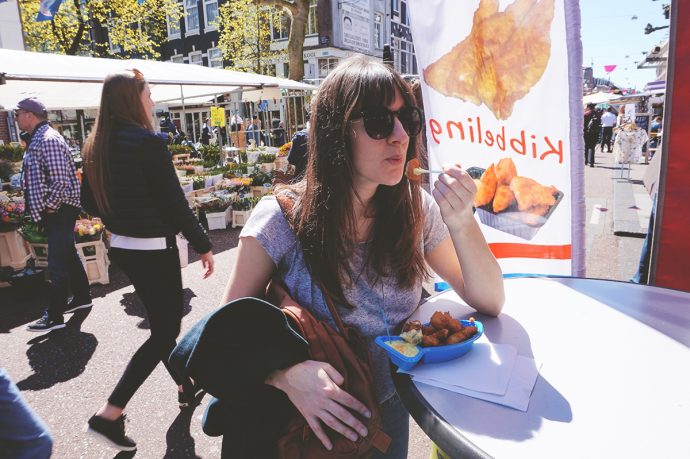 The next stop of the day is the Nine Streets — the part of the city where my offices are based (lucky me). It’s hard not to be taken aback by its charm as you zig-zag your way along the cobbled streets, passing the the canal bridges decorated with bikes. There’s an endless choice of boutiques and cafes but one of my top recommendations is to grab chocolate cookies from Van Stapele Koekmakerij. This place is the epitome of doing one thing and doing it well. It has been said (on multiple review sites) that their signature cookie complete with melted white chocolate centre is the best cookie in the world! I have to admit they are pretty much to die for and I recommend buying one to eat instantly and one for later in the day when you’re left dreaming about how good it was!
Total spent: €3.90
Amount remaining: €26.99 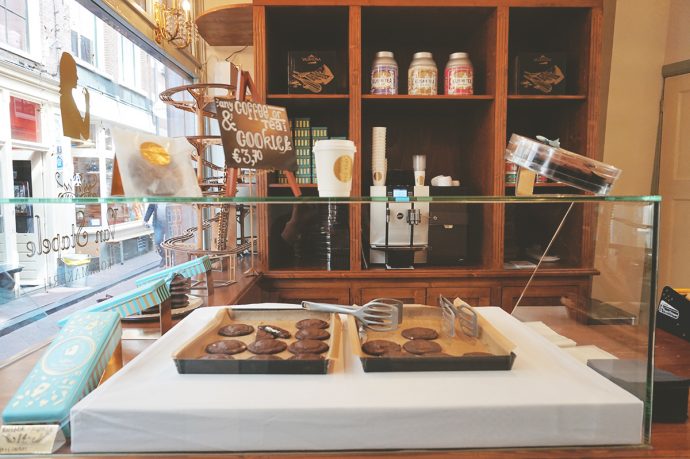 Heaven is a place on earth, more specifically a cookie shop in Amsterdam

Trying to decide where to have dinner was a near-impossible task — there are just so many good places to eat in Amsterdam! Part of me felt that I should add an evening of traditional Dutch cuisine into my Amsterdam food tour, but the truth is that I never frequent such establishments. And so it was, that dinner was a not-so-traditional burger. There is much debate as to where serves up the best burger in town and I even have a friend who dreams of taking the bun from one establishment, and pairing it with the burger of another (yes my pals are equally as obsessed with food as I am). Rotisserie, located in the west of the city (they also have a place in the east) receives rave reviews for it’s meaty treats and has the added of bonus of having beers from a couple of my favourite local breweries on tap, hoorah! I opted for an IPA beer from Oedipus brewing, fries and the Big Double Dirty burger — their standard burger with secret sauce, salad and homemade pickles. The burger was SO JUICY and provided sufficient sustenance after a day of eating my way around the city.
Total spent: €15.40
Amount remaining: €11.59 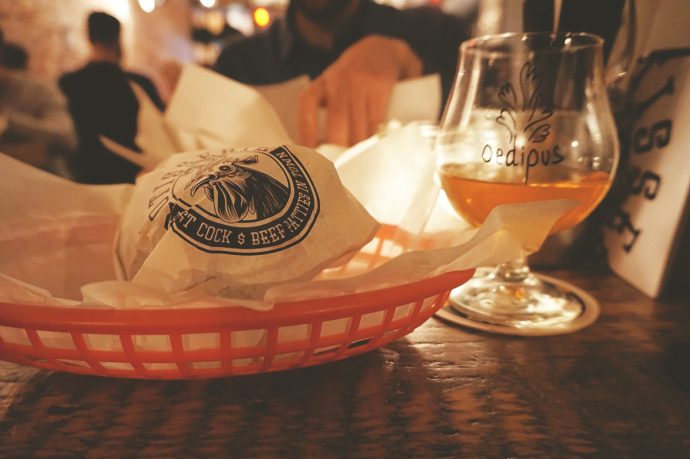 The final port of call is a hidden gem in the truest sense… in the sense that it’s well and truly hidden! The Butcher’s Tears is one of my more recent discoveries — a small brewery located in Amsterdam-Zuid. The best way to get to this neighbourhood is to cycle through the picturesque Vondelpark but it is also easily accessible via tram or bus. Tucked away down a street lined with small industrial warehouses, the Butcher’s Tears doesn’t really feel like Amsterdam at all. The interior is pretty understated with white tiled walls and a few tables, but the selection of beers is decent and the vibes are relaxed and laid back. When the sun is shining there’s a great outdoor area and owing to its location away from the centre it doesn’t get too crowded.
Total spent: €6 (for two beers)
Amount remaining: €5.59 — leaving just enough to cover the withdrawal fee… and perhaps one more beer 😉 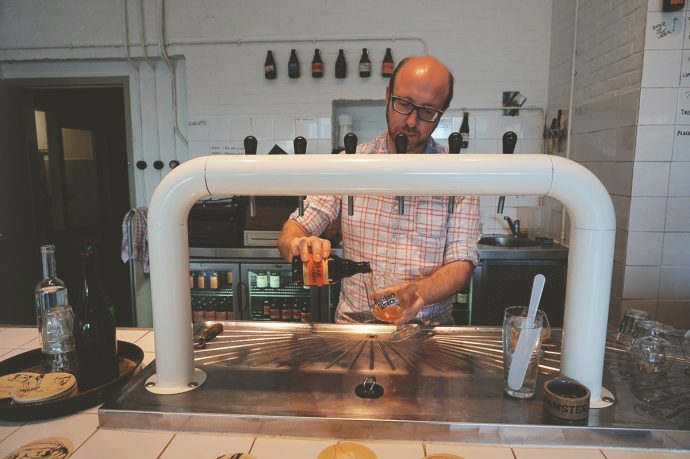 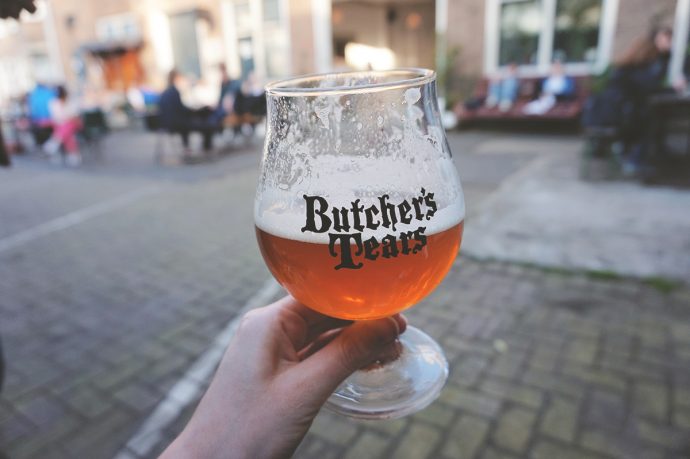 A handy map to help you navigate my Amsterdam food tour

Click on the red pins to see the name and address of all the places listed above!

The Amsterdam Coffee Guide Wander down any street (or canal) in Amsterdam and you won't be short of places to grab a hot drink. Of course, many visitors…

In search of schnitzel: places to eat in Vienna Last month we jetted off to the Austrian capital for a three-day city break. Vienna, with its grand buildings at every turn and enviable…

Other stuff you might like:Things to do in Porto for free The hilly city of Porto boasts an endless choice of museums, cathedrals and…